You disliked this video. Thanks for the feedback!

Phnom Penh (FN), May 12 – People from all over the place celebrate New Year annually. They gather, sing, dance, and spend time with their relatives. However, on 31 December 2019, China has sent a shocked message to the World Health Organization (WHO) about the presence of a new type of respiratory syndrome.

After informing the WHO, Chinese authorities announced on 1 January 2020 the closure of Huanan Market, a seafood and live animal wholesale market, located in Wuhan, a city of Hubei province with a total population of over 11 million. The closure came shortly after Wuhan’s hospital found more than 40 cases of Covid-19 on 17 November 2019.

The condition, first reported by Chinese experts, is caused by the Coronavirus, a type of SARS virus, which emerged in 2003 and killed about 650 people in China and Hong Kong. Significantly, the outbreak in Wuhan in late 2019 spread faster than the SARS outbreak did in 2003.

The outbreak caused by the Coronavirus has led to the suspension of Chinese New Year celebrations in the attempt to prevent the spread of virus.

As the world closes its door with China due to the Covid-19 pandemic, the head of the Royal Government of Cambodia reaffirmed at a press conference on 30 January 2020 that Cambodia will not evacuate its officials and students from China nor ban the Chinese flights to the Kingdom as it would kill Cambodian economy and cut off Cambodia-China relations.

The premier also encouraged Cambodian citizens who work and study in Hubei to remain where they are and extend assistances to China during the hard time. Prime Minister Hun Sen highly commended the Chinese government's prompt and effective prevention and control measures against the pandemic.

"China also observers our behaviour. Why do we stand with them during peaceful time and leave them during difficult time. More than 1,400 million Chinese dared to stay there. Why couldn't we?”, he asked.

Not only appealing for Cambodian people to remain in China, prime minister also announced that he would visit China to provide spiritual support to the ironclad friend and give warmth to Cambodian students there. The statement was made at a gathering with Cambodians in South Korea in the evening of 3 February 2020.

“There is a mocking that Hun Sen cares about people everywhere. He will visit Cambodian people in Wuhan. I told them I will go! If the Chinese government allows”, the premier stressed.

The announcement of the head of the Royal Government of Cambodia has impressed Cambodian and Chinese people. They are deeply touched with the big heart of Cambodia, and the good people-to-people tie and nation-to-nation friendship. At the same time, both Khmer and Chinese people expressed their concerned with the safety of the premier during his visit to China.

Concerned and fully aware of the caring nature of Prime Minister Hun Sen, the Chinese government allowed the premier visit Beijing, but not Wuhan as the city was closed for virus prevention.

On 5 February 2020, the premier, accompanied by several Cambodian delegates, visited Beijing, the Republic of China. The working visit was regarded by Chinese President Xi Jinping as a strong demonstration of support for China. "Cambodia is a loyal friend of China," President Xi stressed. 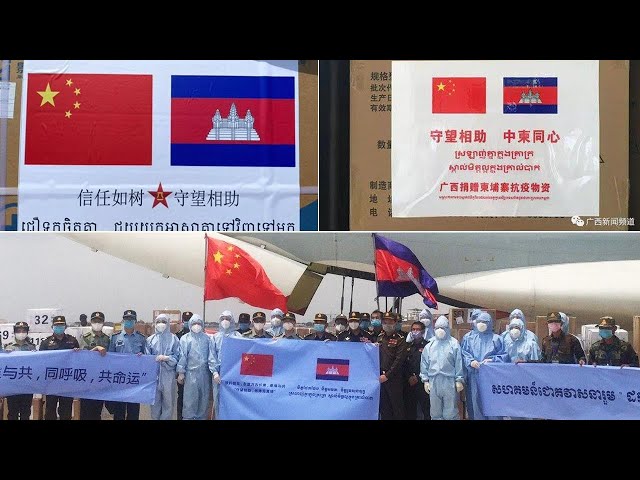 Special Report: Covid-19 Pandemic Brings Cambodia-China Relations to a New Level Phnom Penh (FN), May 12 – People from all over the place celebrate Ne...